Welcome to the most comprehensive Landscape/Hardscape Blog!

Encore vs Bloom-A-Thon Azaleas - Which are better for Tulsa Landscapes?

Few shrubs are as glorious in the Spring as the Azalea.  So many colors and sizes to choose from allow you to select the perfect plant for each location. Azaleas are part of the Genus Rhododendron. The plants generally enjoy north & east exposures and don't take to much late afternoon sun.

Encore® Azaleas are the only patented brand of azaleas to bloom in spring, summer and fall. Each of the 29 Encore varieties begins their performance with the spring flowering season. Once this “first act” of blooming concludes, new shoots begin to grow and set buds. The Encore® Azalea's "second act" opens when these buds begin blooming into full flower mid-summer. This unique bloom season continues through the fall, the curtain dropping with the onset of cold weather. But, the show goes on. As an "encore," these exceptional azaleas flower again with traditional spring azaleas and the process starts over.

Tulsa enjoys all the benefits of the Encore Azalea and it generally tolerates a little more of the Oklahoma sun than traditional Azalea varieties. 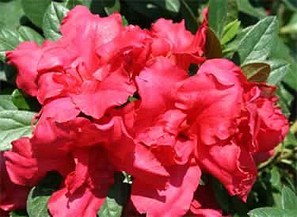 We have used both plants and really don't have a strong opinion.  Certainly, the Encore Varieties have a great choice of many colors.  Soon, I hope we have a smaller mature size plant.  If you prepare a proper planting mix (75% peat moss, 15% pine bark, and 10% sand or soil), you can be assured of success.  Make sure and wet the mix well (stir and add lots of water) before planting.

We love Azaleas and Spring in Tulsa.  Call us today to find out more or click below to get more information.